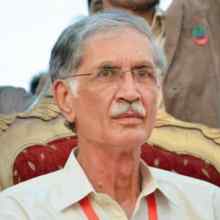 Pervez Khattak born in 1 January 1950, He is a Pakistani politician, parliamentarian who is serving as the Chief Minister of Khyber Pakhtunkhwa. He also served as the Irrigation Minister of Khyber Pakhtunkhwa and twice Minster of Industries & Labour in the past. Khattack relinquished his elected post as the Secretary General of Pakistan Tehreek-e-Insaf on 25 September to Jahangir Tareen.

Khattak is renowned for his reformist views of Pakistan's poitical system, he prioritised accountability in his own government, increased education enrolment, instituted reforms in the police and security sector, anti-polio campaign and plans infrastructure projects such as improving the transportation network He also planned to revive the local economy by helping to rebuild tourism in the area While for the long term, he plans industrialisation of the economy and a reduction in red tape.

Nonetheless, he takes a hardline against drone strikes, viewing them as extending extremism and has threatened to block NATO supply lines if drone strikes continue and the Federal Government refuses to prevent them Following 2 November Drone Strike, a day before peace talks were due to start with the Taliban, Khattak affirmed that he would indeed use his power to push for the blocking of NATO supply lines.

Pervez Khattak born at the residence of noted government contractor Hastam Khan (late) on 1 January 1950 at village Manki Sharif in the politically fertile district of Nowshera, Pervez Khattak received his early education at the Aitchison College,Lahore.After doing Senior Cambridge from Aitchison,Khattak went to Gordon College,Rawalpindi for his graduation.He had also worked as political worker of Pakistan Peoples Party (PPP).

Pervez Khattak is father of three sons and two daughters. His eldest son Ishaq Khattak, after completing his education, is managing the company that his grandfather had established before the creation of Pakistan. His other two sons Ibrahim Khan Khattak and Ismail Khan Khattak are receiving education in United Kingdom.