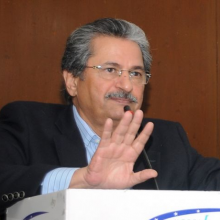 Shafqat Mahmood was born on 19 February 1950. He is the son of Walayat Khan and current the member of National Assembly from NA-126 Lahore. He was elected as the memeber of national assembly in the general election of 2013.

He completed his masters degree in Public Administration from Harvard University Cambridge , United States of America in 1981. He also holds a master degree in Public Policy and Administration from the University of Southern California which he completed in 1987. He has served the civil service of Pakistan for about 12 years. He served as assistant commissioner in Murree and Pakpattan from 1978 ,after which he was posted as a provincial deputy secretary in Lahore till 1980 .He also served as deputy commissioner in Gujranwala and DG Khan and also as additional commissioner Afghan Refugees Organisation for quite some time in 1985. He was additional secretary finance in Punjab during 1988-89 and later served as joint secretary PM’s Secretariat from 1989 to 1990.

He he joined Pakistan Peoples Party and became a politician in 1990. He was elected as Senator in 1994 for a period of six years. He also served as Federal Minister in caretaker government of Prime Minister Malik Meraj Khalid. Shafqat Mahmood was a member of the Senate Standing Committees on Cabinet, Establishment and Management Services, Defence, Defence Production, Aviation, Foreign Affairs, Kashmir Affairs and Northern Areas, and the Functional Committee on Govt Assurances . He joined Pakistan Tehreek-e-Insaf on 13 December 2011. and  served as the Information Secretary of the party.

He can be contacted at : [email protected]