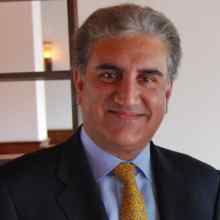 Makhdoom Shah Mahmood Qureshi is a prominent politician of Pakistan. He is also an agriculturist. Qureshi is current Senior Vice Chairman of Pakistan Tehreek e Insaf. Early Life and Education Shah Mahmood Qureshi was born on 22 June, 1956 at Murree. He belongs to a noble, religious and political family of Multan. Qureshi received his early education from Aitchison College, Lahore. He received a Bachelor's degree in History from Forman Christian College. Qureshi also received a Master's degree in Law and Politics from University of Cambridge(England). He is married and has 3 children. Qureshi’s father Makhdoom Sajjad Hussain Qureshi was Governor of Punjab(1985-1988) and his grandfather Makhdoom Mureed Hussain Qureshi was Member of Legislative Assembly in British India. He was also a companion of Quaid e Azam Muhammad Ali Jinnah. Shah Mahmood Qureshi is current custodian (Sajjad Nasheen) of Shrines of Hazrat Ghous Bahauddin Zakariya Multani and Hazrat Shah Rukn e Alam. Political Career Shah Mahmood Qureshi was first elected to the Provincial Assembly of the Punjab from Multan in 1985, which were held on a non-party basis. He joined the Pakistan Muslim League (PML) under the leadership of Muhammad Khan Junejo in 1986. He joined the faction of PML led by Nawaz Sharif, which later became PML (N), when PML split in 1988 after the death of Zia-ul-Haq. He was re-elected to the Punjab Assembly from Multan in 1988. He served as the Minister of Planning and Development in the cabinet of Chief Minister Nawaz Sharif from November 1988 to August 1990. Qureshi served as the Minister of Finance in Chief Minister Nawaz Sharif's cabinet from 1990-1993.Qureshi parted ways with Nawaz Sharif in 1993 and joined the Pakistan People's Party (PPP) in 1993 under the leadership of Benazir Bhutto. He was elected to the National Assembly of Pakistan from Multan in the general elections of 1993, and served as the Minister of State for Parliamentary Affairs under Prime Minister Bhutto. Qureshi served as the District Nazim of Multan from 2000 to 2002.