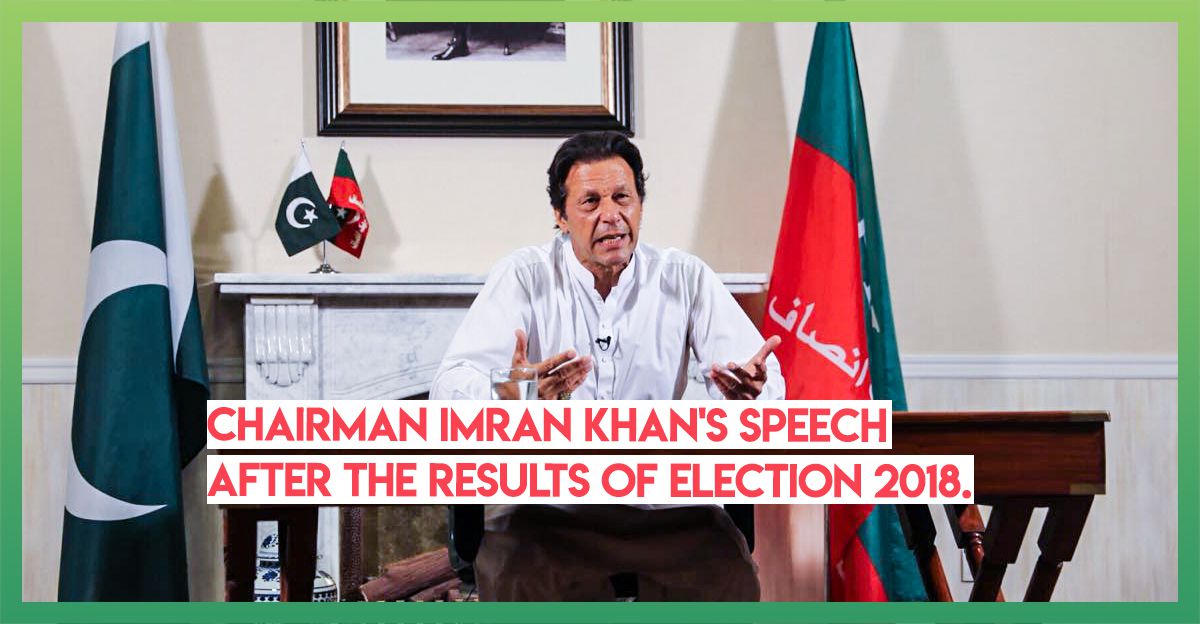 Here is the transcript of Chairman's speech.

I came into politics because I wanted Pakistan to become the country that Jinnah had envisioned. This has been a historic election. This election has been historic; people have sacrificed so much. I especially want to thank the people of Balochistan who despite terrorism came out in huge numbers to vote. The scenes I saw on tv; the way overseas Pakistanis came, the elderly, the young. I want to salute them all because they have made our democracy evolve and progress. All the difficulties we faced.

Our Ikram Gandapur, Haroun Bilour were martyred and yet the elections went on. I want to thank our forces, our party workers. I just want to say a few things about the kind of Pakistan I want to see. My inspiration is our Prophet (PBUH) who believed in a welfare state; where we take responsibility for our weak. We became the opposite of the welfare state we were to become. The state where poverty rose, and the big dream for equality in Pakistan deteriorated. Our policies is to lift our most poor.

Our labourers, our farmers who don’t even make enough money to feed their children properly. Majority of our children suffer from stunted growth. We don’t give our children the opportunities to excel. 2.5 crore kids are out of school in our country; this is more than the population of some countries. Female pregnancy mortality rate is one of the highest in our country and the highest number of children die of drinking dirty water. Our whole focus is on human development. Nations are not recognised by how their elite live; rather it is recognised by how it treats and lifts its poor.

The example of China lifting 70 crore people out of poverty is in front of us. Our focus on justice, equality and opportunities. Those are the principles we need to work towards. I don’t think any leader has seen as many personal attacks as I have seen in the past 3 years. I have forgotten it all and it’s behind me. This is bigger than Imran Khan. This is about the country, We will not let political victimisation of anyone happen. No one will be above the law; this is our aim. And for these checks and balances we need strong institutions.

We want the kind of institutions that will ask Imran Khan and his ministers questions. Accountability will begin with us and then trickle down. We want to set an example that the law will be supreme. The west is ahead of us purely because of these principles and this must become our guiding principle. We want to make such institutions that will fix the governance system of our country. Otherwise we will never be able to win our own challenges; the economy being the biggest. In our history we have not seen such a big fiscal deficit, the rupee at such an all time low. We need to make an investment and ease of business environment.

The prime minister house, a palace... I will be embarassed going and living there. Our government will decide what we will do with the PM house. We want to turn it into an educational or public institutions. We will convert governor houses into public spaces that are able to collect revenue. All the lavish treats that previous rulers have enjoyed at the sake of awaams money, this will all change. We have to work with our businesses, facilitate them so they are able to facilitate jobs. So my second pledge is to collect and reform taxes.

Anti-corruption, NAB and FBr will be restructured. The entire government will work towards helping our farmers and lifting them out of poverty. We will focus on education and vocational skills to empower our youth. Our focus will be on human development. Foreign policy is a huge problem for us as a country right now. We need better relations with our neighbours so we can focus on nation building. We will strengthen and improve our relations with China. We want to work towards success of CPEC.

We also want to send teams to learn poverty alleviation from China. How to lift our most poor who can’t even eat two meals a day. The second thing we can learn from China is how they curbed corruption and set the example that corruption does not pay. Afghanistan is that neighbour of ours that has seen the most human misery and damage in the name of wars. The people of Afghanistan need peace, and Pakistan wants peace in Afghanistan. We want to work in every possible way to ensure peace in Afghanistan.

I would love an open border system like the EU with Afghanistan. As far as America is concerned, we want to work on a policy that is mutually beneficial. Not a One way relationship. There needs to be balanced. We want to improve our relations with Iran and Saudi Arabia both. We want to work as a reconciliation facilitator in the region. That country that works towards ending wars rather than being used for them. As far as India is concerned; I was disappointed with how Indian media portrayed me in the past few weeks. As a villain.

I am that Pakistani who has travelled through India because of my cricket. I am that Pakistani who believes that to improve economics in the sub continent trade between India and Pakistan is important. This will be beneficial for both the countries. Kashmir remains our biggest contention. The human rights violations over 30 years; and the people of Kashmir have suffered massively. The leadership of Pakistan and India now need to come to the table to resolve this and end the blame games. We are stuck at square one.

If India comes and takes one step towards us, we will take two steps toward them. Right now it is one sided where India is constantly just blaming us. I promise to the nation that I will be the same Imran Khan who will protect your money. Who will change this system of elite governance. I promised you I would make a cancer hospital, you gave me the money and we have two cancer hospitals in Pakistan today. World class giving 70 percent treatment free. I promised you I would make a university in the most remote area of Pakistan, where poor students would get scholarships,

I proved to you and I did it. I promise to you my biggest effort today will be to stand with our most downtrodden. Our minorities, our domestic staff; anyone under the poverty line. Anyone who has issues of rigging; we will help you facilitate and we will open up the halkas. When we asked for probes, we were not facilitated but we will do it differently. We are ready to investigate any rigging claims with the opposition. I want to thank Pakistan and thank you all for giving me the opportunity to make my promises to you a reality. Pakistan Zindabad!