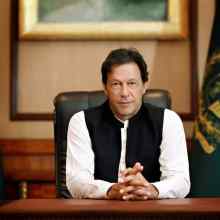 Imran Ahmed Khan Niazi was born in Lahore, Pakistan on 5th October, 1952 to Ikramullah Khan Niazi Shermankhel and Shaukat Khanum (Burki clan). He was the only son of the family, and grew up amongst four strong sisters. His educational journey began at Aitchison College and the Cathedral School in Lahore where he finished middle school; and then entered the Royal Grammar School, Worcester, before completing his formal education with an undergraduate degree in Economics, Political Science and History from Keble College, Oxford. While at University, Imran Khan was also the captain of the Oxford University cricket team in 1974.

Imran Khan went on to become one of the top cricket all rounders in the world, and remained captain of the Pakistan cricket team for 10 years, while his cricketing journey for the national team spanned between his debut in 1971 and the historic World Cup win in 1992. The team he captained, who are most famously known as “Imran’s Cornered Tigers” won almost against every opponent on their own home grounds. Lesser known, but forever marked as his contribution to the game of cricket is his struggle for neutral umpires, which changed the nature of the game to date.

The end of his cricketing journey was only the beginning of his now world renowned philanthropy work. Deeply affected by his mother’s battle against cancer Imran Khan vowed to build and run a cancer hospital which would treat the poor for free. It was a monumental endeavour and there were many detractors but Imran Khan was undeterred. While watching his mother suffer he had realised that the early diagnosis and proper treatment was both unavailable and ill affordable for the poorest of the poor in his country. Having resolved to do the impossible Imran Khan set his considerable energy and commitment to the task and within a short span of two years he launched the biggest crowd funded campaign to make his mission a reality and Shaukat Khanum Cancer Hospital, a world class facility opened its wards for the  treatment of the poorest citizens of Pakistan on December 29, 1994. Today, the hospital treats 70 percent of its patients for free, and has its current biggest facility in Peshawar, and another facility set to be inaugurated in Karachi at the end of 2018. Over 50 Billion has been spent on the treatment of the poor over these 24 years.

It was Imran Khan’s foray into philanthropy and his interaction with the common people of Pakistan that led to the idea of him entering the political arena. His movement for respect of law, equality for all, meritocracy, development of human capital and above all anti-corruption took root in as he came in contact with the ordinary citizens of Pakistan. His journey to discover his own roots took him all over the country and he found his purpose in life in the service of the most marginalised and exploited masses of Pakistan.  The shy young cricketer who had always challenged the idea found his calling and on the 25th of April, 1996 he officially formed his political party, the “Tehreek-e-Insaf-e-Insaf”; Pakistan’s Movement for Justice.

Imran Khan first entered the National Assembly of Pakistan in 2002, his party winning a single seat, his own, from his home region of Mianwali. He reciprocated his gratitude to the people of the region by beginning work on a top class university and knowledge city, known as Namal University. Set in a remote region, against mountainous backdrops, 90 percent of the students at the university come from humble backgrounds and study on scholarships. The degrees awarded at the university are in affiliation with Bradford University, where Imran Khan has also been honoured as a chancellor.

Along with his ongoing philanthropy work, Imran Khan’s political career has been constructed on love for the people of Pakistan and he has not shied away from controversy, often taking up positions against the status quo and challenging corruption, exploitation and oppression whether by internal forces wanting to hold Pakistan hostage to an extractive political environment or taking up the campaign against drone attacks by the US, highlighting the illegality of extrajudicial killings, with a high civilian death toll in Pakistan’s tribal belt. He was also one of the leaders of the lawyers movement, where the nation was mobilised in its campaign for a free and fair judiciary in 2007-2008. The movement peaked when Imran Khan was arrested at the behest of a dictator amongst a jam packed student body at Punjab University. Emerging from jail a few days on after heavy pressure when world wide protests broke out calling for his release, where his two young sons Qasim and Suleiman too were seen in London protesting for the release of their “abba”, Imran Khan spoke not of abysmal jail conditions for himself, but rather pointed out the eye opening lack of justice within our prison system where even those wrongly accused, or who had served their terms were simply languishing in jail because no one took up theirs cases to defend them.

It was on the heels of this movement, that Imran Khan and the Tehreek-e-Insaf boycotted the 2008 general election. This was at the peak of Imran Khan’s anti-drone campaign, and the campaign against extraordinary renditions of Pakistani citizens in the name of the War on Terror. He constantly raised his voice on what was now a free media to the plight of the internally displaced, and it was in October of 2008 when he galvanised a fundraising campaign to raise funds to rehabilitate regions that had been left devastated by an earthquake that killed over 80,000 Pakistanis. Under his IKF fund, he raised over a billion in earthquake relief funds and also mobilised volunteers across Pakistan to help with the rehabilitation process. IKF to date works on rehabilitation at times of natural disasters, including when the deadly floods hit in Pakistan in 2010, and also works with low income farmers to provide them with quality seeds and fertiliser to held facilitate their local economics.

2008 on Imran Khan continued his human rights campaign against drone attacks, and led many sit ins against the extra judicial killings across the country. As the popular narrative took a turn towards a war that was becoming unpopular globally, a massive public rally at Lahore’s historic Minar-e-Pakiatan on the 30th of October 2011 propelled Imran Khan’s party into the mainstream. The youth that he had predicted would be his voters some 12 years back had come of age, and PTI became an idea whose “time had come”. In Imran Khan’s own words change was not just coming, it had arrived in the form of a new Pakistan whose vanguard was the youth. The premise of his stance remained the same; anti-corruption, and equality and justice for all. Suddenly Imran Khan became the voice of the urban and the rural, the educated and the non educated, from students, professionals and to rickshaw drivers everyone related to what Imran Khan’s message was. His rallies became a sea of charges citizens wanting change and an end to political exploitation. Women became his most vocal supporters and for the first time in Pakistan’s politics a mix of gender and socio-Economic groups became the enduring image at PTI public rallies.

PTI’s popularity surged to a peak with historic jalsas in Karachi, and other cities across the country in the run up to the elections in 2013. The campaign took a turn for the worst when Imran Khan had a near fatal fall off a crane while climbing a stage to address an election rally on the 7th of May 2013 in Lahore. For two days, the country had no idea what his health would be like. On the 9th of May 2013, he addressed a historic rally via video call from his hospital bed; the crowds were in the hundreds of thousands at D-Chowk in Islamabad. PTI was unable to make government at centre, but came into power in the then war torn and terror riddled province of Khyber Pakhtunkhwa. The elections were mired in post poll controversy with rigging allegations; Imran Khan accepted the results in a message from his hospital bed, but called for a probe into just 4 constituencies which would set the tone for future electoral reforms in the country. This also set the basis for the longest running anti rigging protest in Pakistan’s history led by a fully recovered Imran Khan in 2014.

Achievements and progress in what analysts and experts described as a “quagmire” in KP are the highlights of Imran Khan’s public service in politics in the time period between 2013-2018. Coming in with a team of mostly young ministers in the province, combined with a veteran politician as CM in the province, some of the biggest highlights of PTI’s governance in KP under Imran Khan’s leadership have been polio eradication (WHO declared Peshawar polio free for the first time), the world renowned and celebrated billion tree tsunami project, clean energy projects across the province in the form of micro hydel plants, depoliticisation of the police, an upsurge in tourism, the return of over 200,000 children to the public school system because of improved quality, reforms across the medical system, topped off with the flagship project of the Sehat Insaf Card which has been provided to over 70 percent households across the province that ensures insurance cover up to Rs. 540,000 at private hospitals too. In addition to this, the province has also brought in a robust local body governance system which has seen funds devolve to district, tensile and village level; development funds are no longer used to win loyalty amongst members of the assembly in the name of development. Funds are dispersed according to local decisions. Human development has been at the forefront of PTI governance in KP.

Side by side with the performance in KP, Imran Khan’s anti corruption stance was further galvanised when the names of some of Pakistan’s most popular politicians emerged in the famous ICIJ papers globally known as the “Panama Papers”. Imran Khan led the movement that took the country’s most powerful to the courts of accountability. This combined with the achievements in KP set the tone for his election campaign with a marathon of 60 plus rallies in 20 days  in the run up to the elections on 25th July 2018. PTI emerged victorious at the polls with 116 seats in the National Assembly. This rall now stands at 150 with independents and other political parties joining Imran Khan and set to nominate him as the 19th Prime Minister of Pakistan.

There is a huge air of expectation and positivity about Pakistan. In what is recognised as a victory speech Imran Khan the leader of a political party that has a 22 year long struggle for justice and equality Imran Khan has set the tone with his vow of simplicity and desire to change the lives of the ordinary citizens of Pakistan. Imran Khan has always defied the odds. Taken up challenges that many considered impossible to defeat and bested adversity through the sheer will to do the right thing and succeed. Just when Pakistan needs, Imran Khan has been given the mantle of national leadership and it promises to be a new era of change for the entire country.

Click Here to view the assets of Imran Khan